this was a great game. First of all as we reintroduced a player who has been away from the game for a while. Second, because we haven’t played since May and third because I found it fun trying to make a game based on the classic drug exchange scenario from cop shows and movies.

It was also using a small set of scenery I’ve created while we are relocated to Stockholm for the winter. 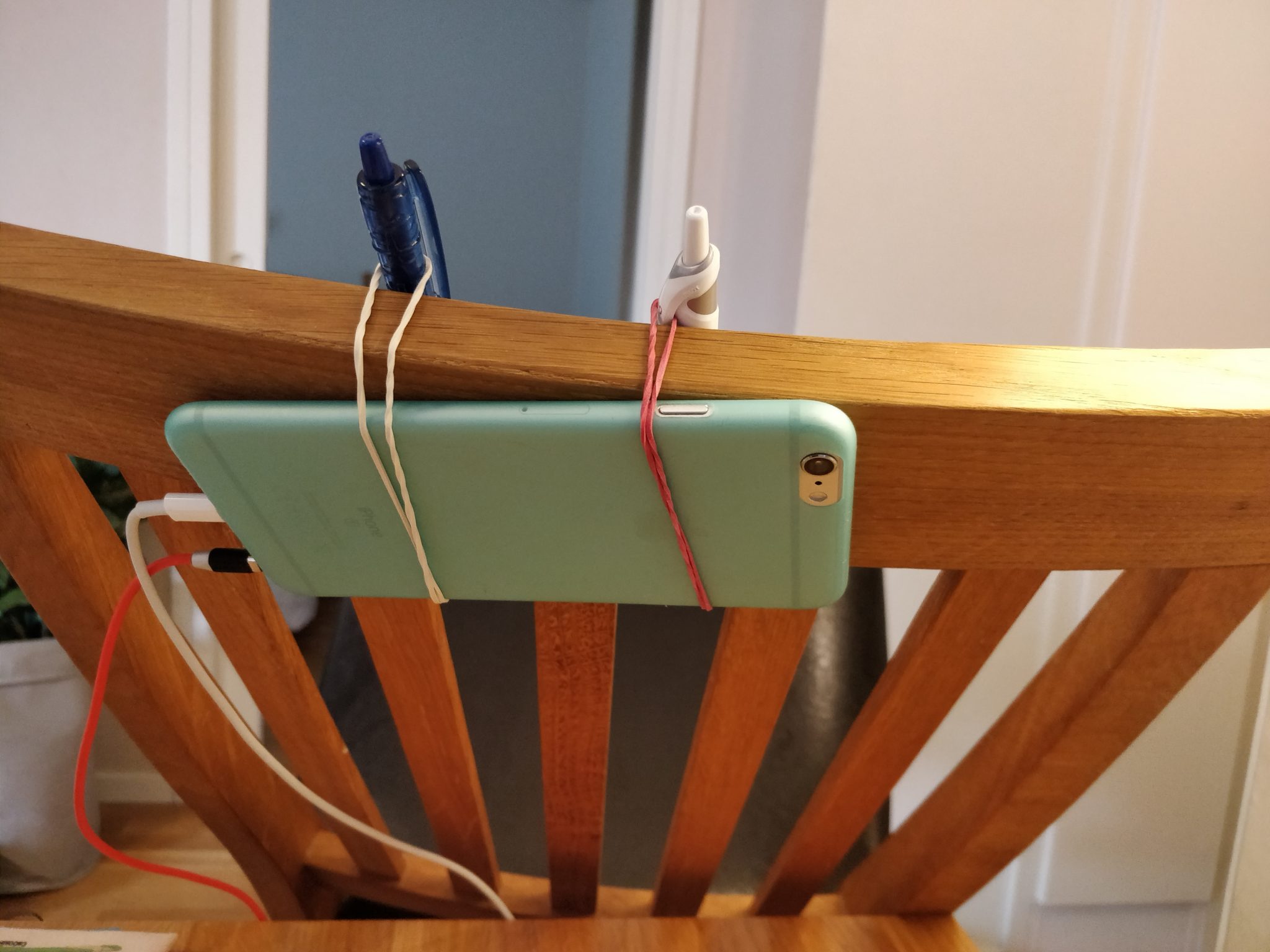 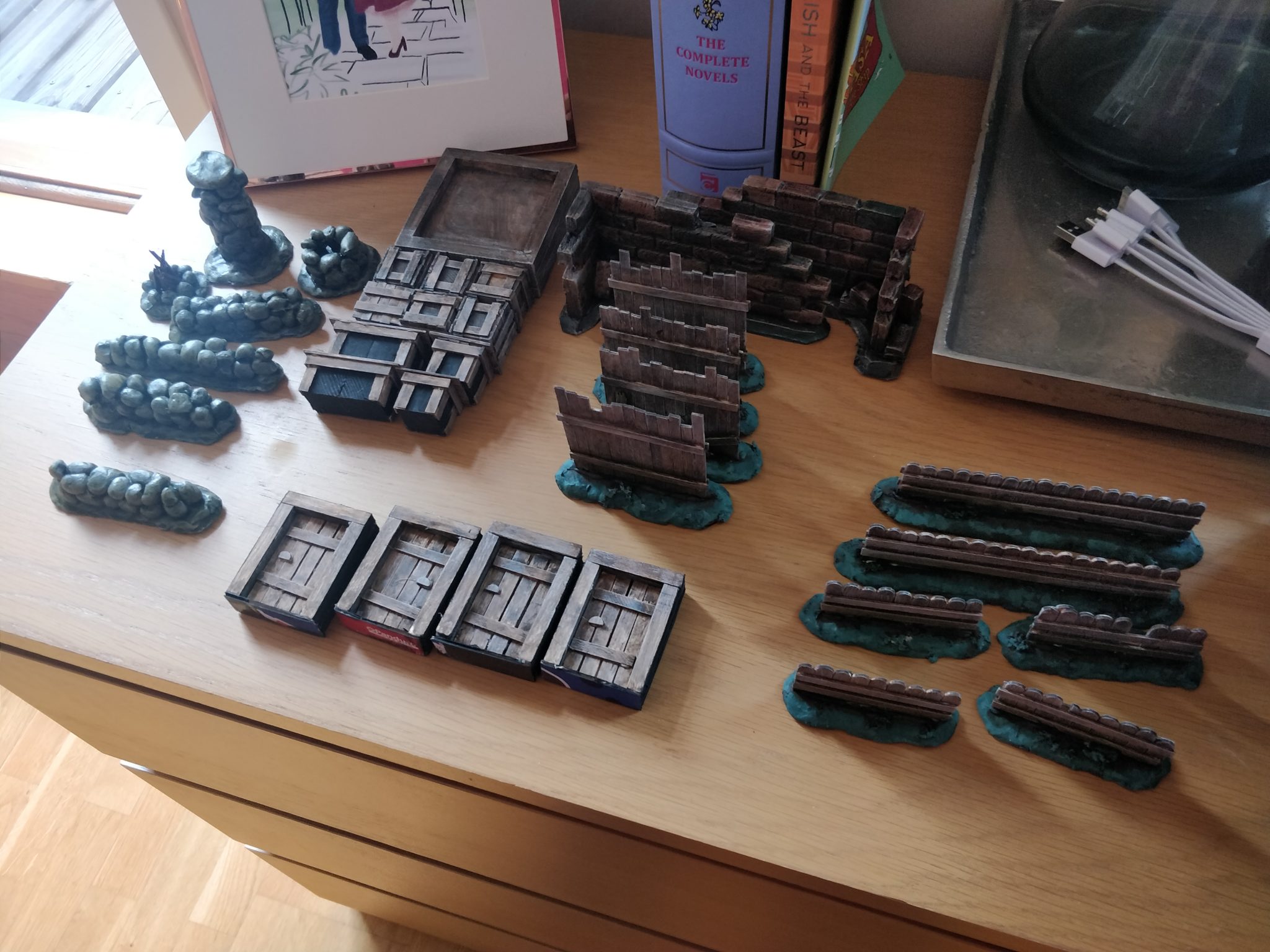 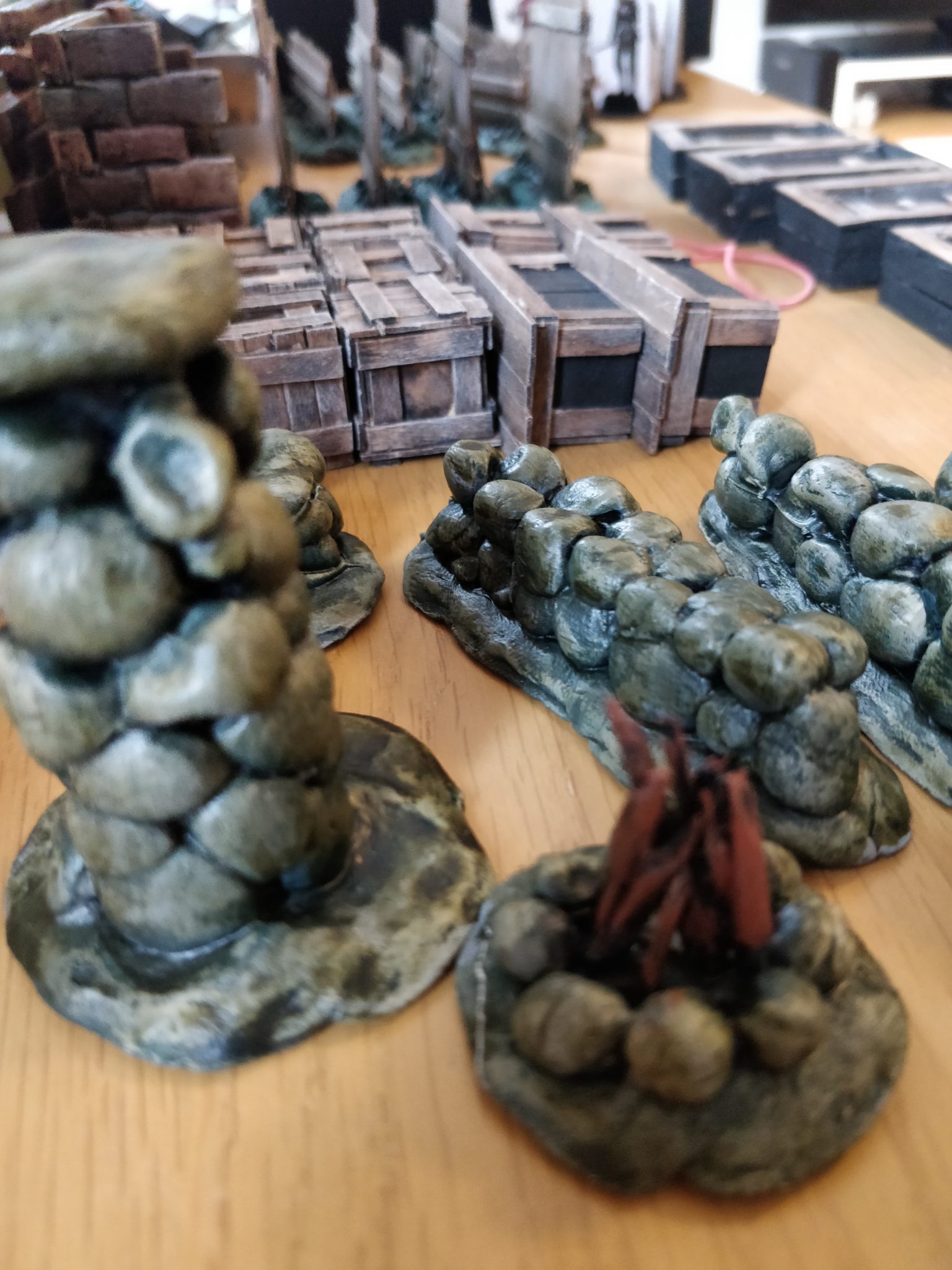 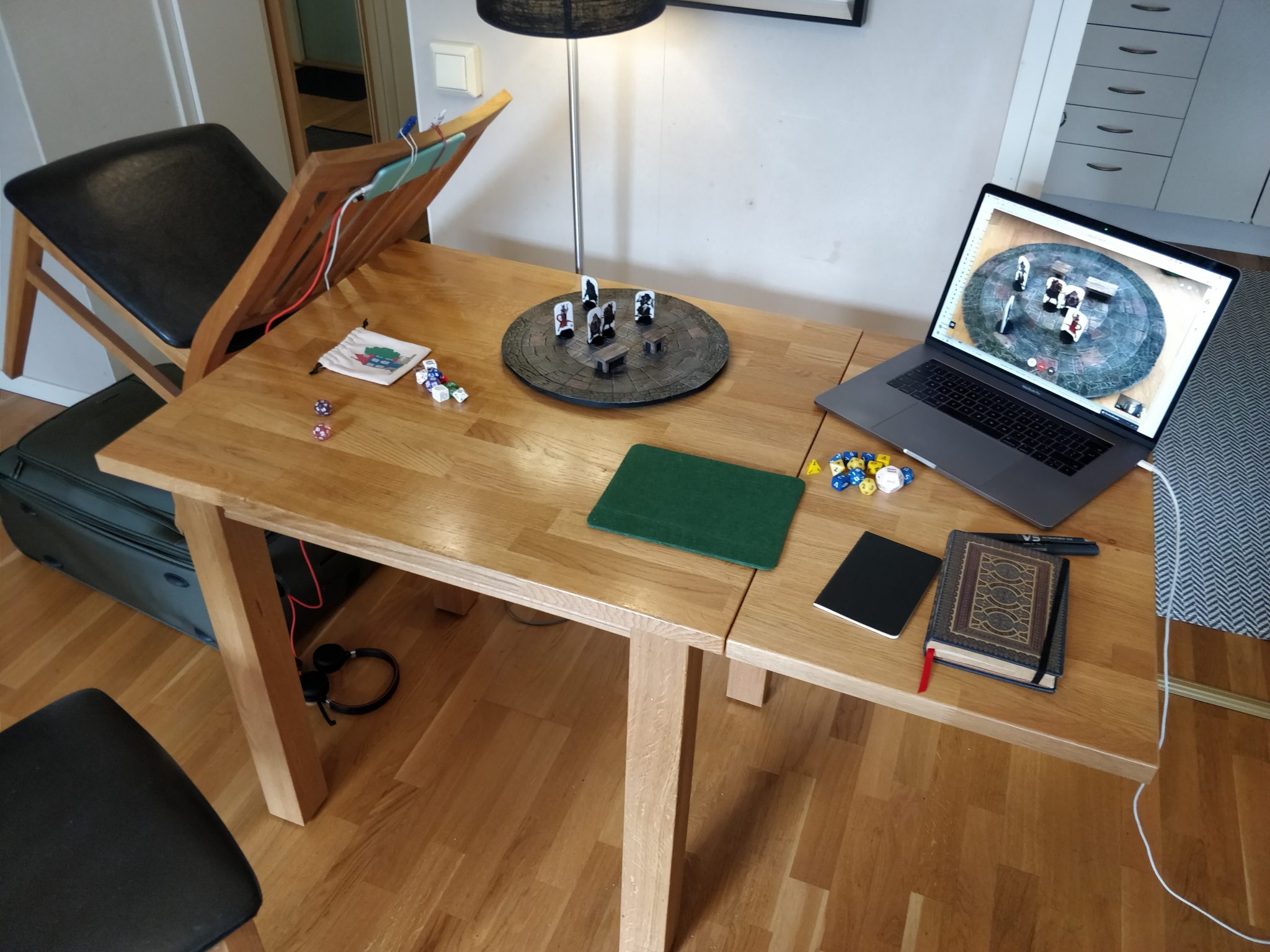 Having learned that the remaining Nightshift party had information about the Twilight Vine, the cult associated with the consumption of Fey Blood and had connection to Grimshaw’s dead aunt, B.J. took them to Grimshaw’s house.

Here the heroes debated the various clues they had between them and decided to find out who had taken over the illegal Fey Blood trade after the now deceased Dr. Wendel Cane. Grimshaw suggested asking the unusually intelligent Ogre they had encountered in the Gutters.

They located the Ogre easily and he told them of dodgy dwarf named Waltmeg the Weasel who was known to be having connections to the underground trade of Fey Blood and could be find in the tavern The Hag’s Head at night time.

The party then went to Dr Cane’s office where they met Lord Genlamin Yelfir, the Elven Ambassador to Daisygate who introduced them to The Springborn Duke Astro Applemint, a Eladrin Elf from the Feywild.

Duke Applemint told the party that a big exchange of Fey Blood was due to happen soon and that he required the party to be there and capture the Fey who was selling the blood. They were to use Waltmeg to introduce them to the buyer and in exchange Watmeg would get his name back from the Duke. 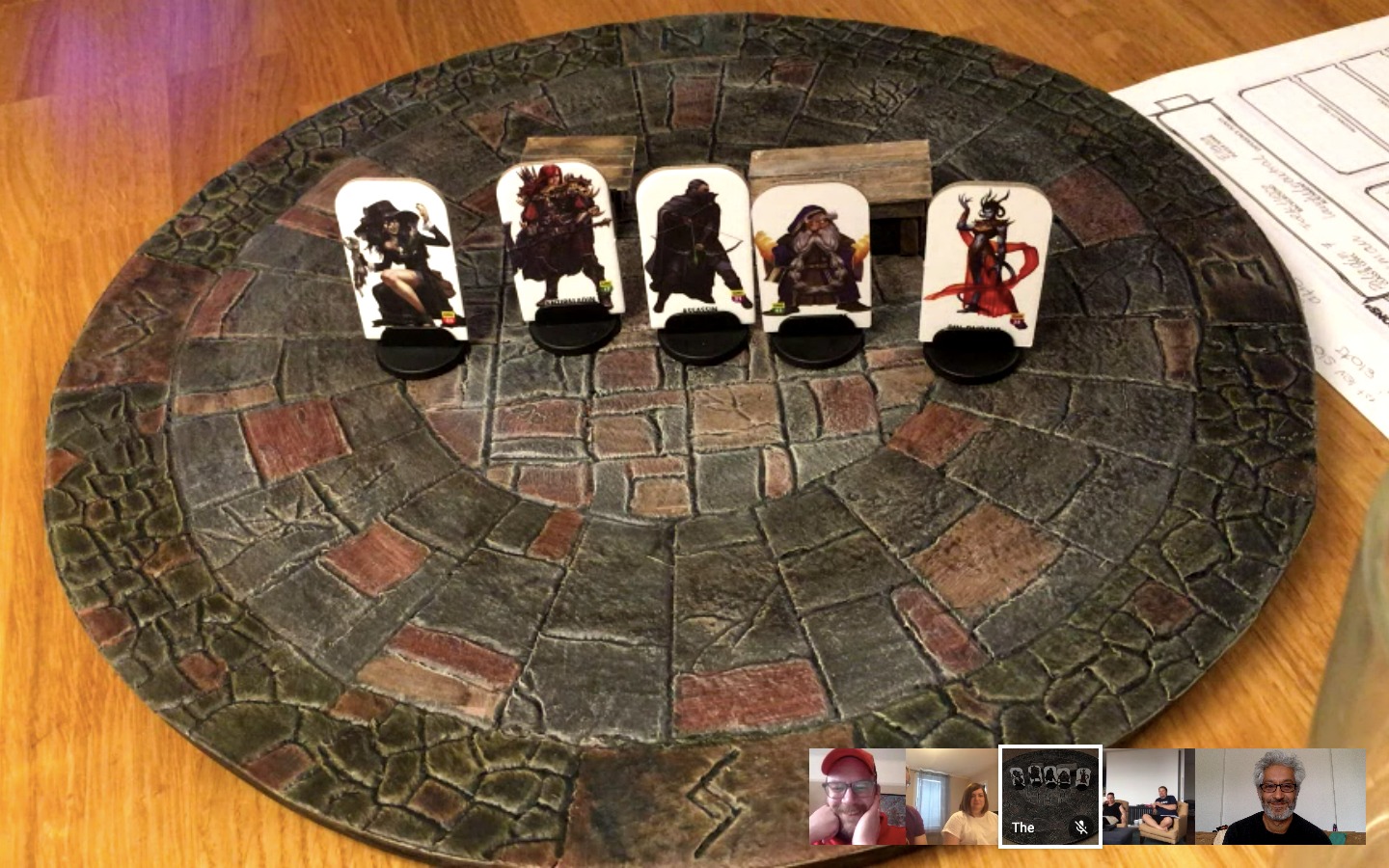 Finding and the Weasel

The party positioned themselves in the Hag’s Head with B.J. the Trueborn and Barien Landon, the Drow Ranger staying on the ground floor and Damon the Paladin, Grimshaw the Barbarian Dwarf and Alyanys the Half-Elf Warlock upstairs.

Waltmeg arrived at the tavern and made it past the ground floor undetected as the duo was looking for a Dwarf, not a weasel!

Upstairs though, Mr Giggles, Grimshaw’s rat and Damon spotted the weasel running across the floor and transform back into his Dwarven shape.

Unfortunately, as they notified the others, Grimshaw gave them away, and Waltmeg quickly headed for the door, but was cut off by the party.

He then went the other way around heading for the window behind the stage and almost made it out before taking two javelins in the back from Damon, throwing him out the window.

Outside, B.J. and Barien was waiting and with a blanket across the window, they captured Waltmeg as he tried to flee. 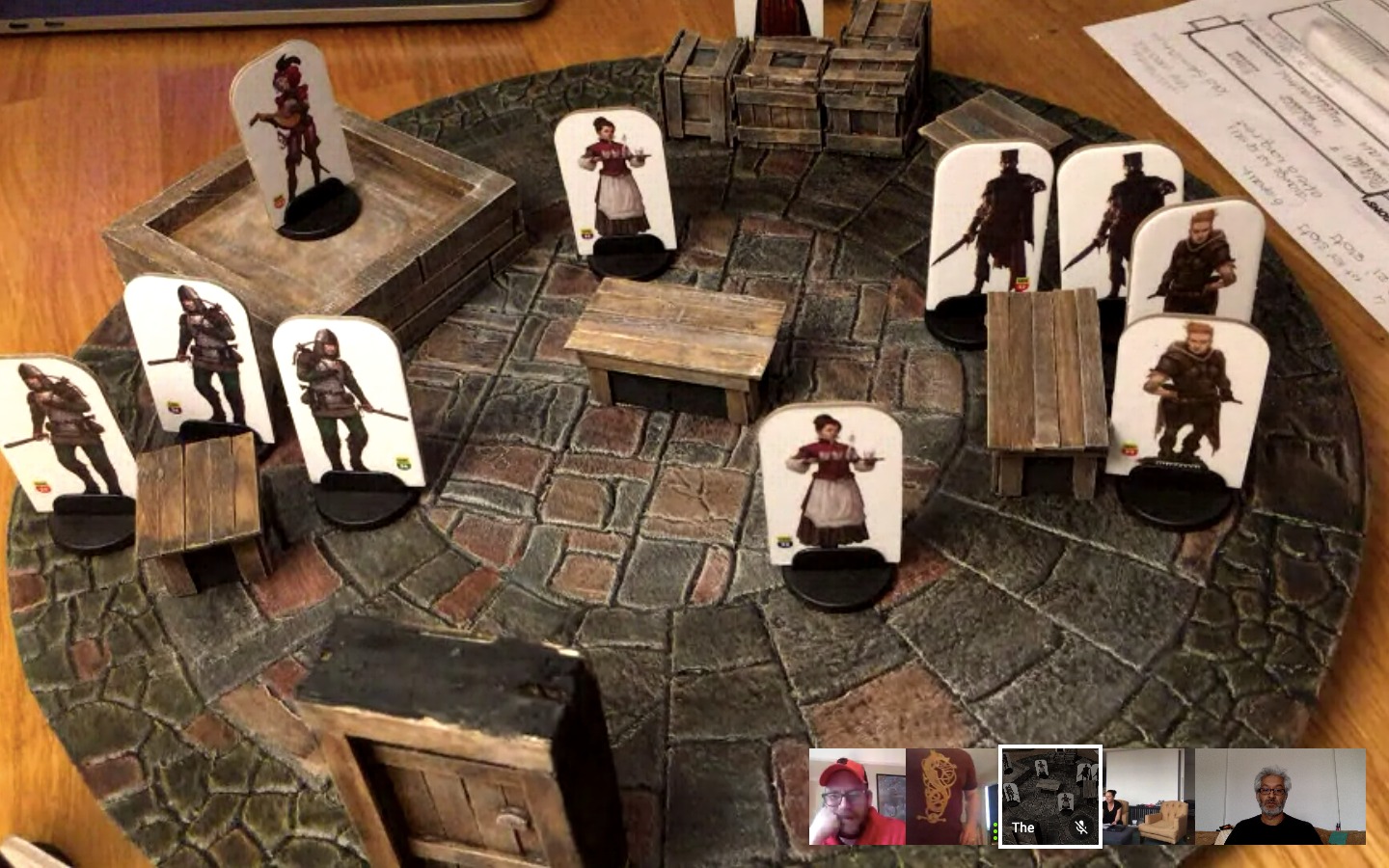 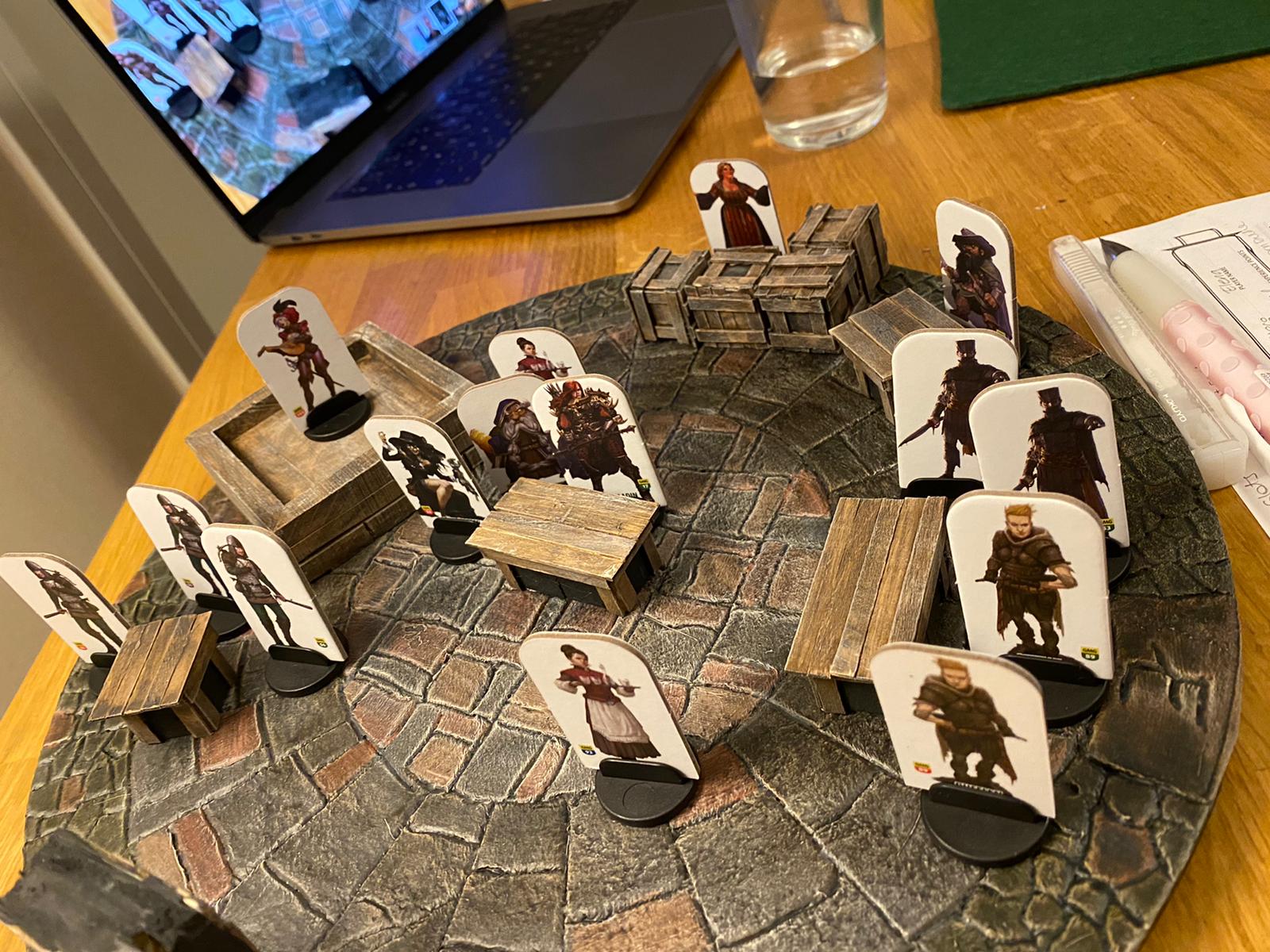 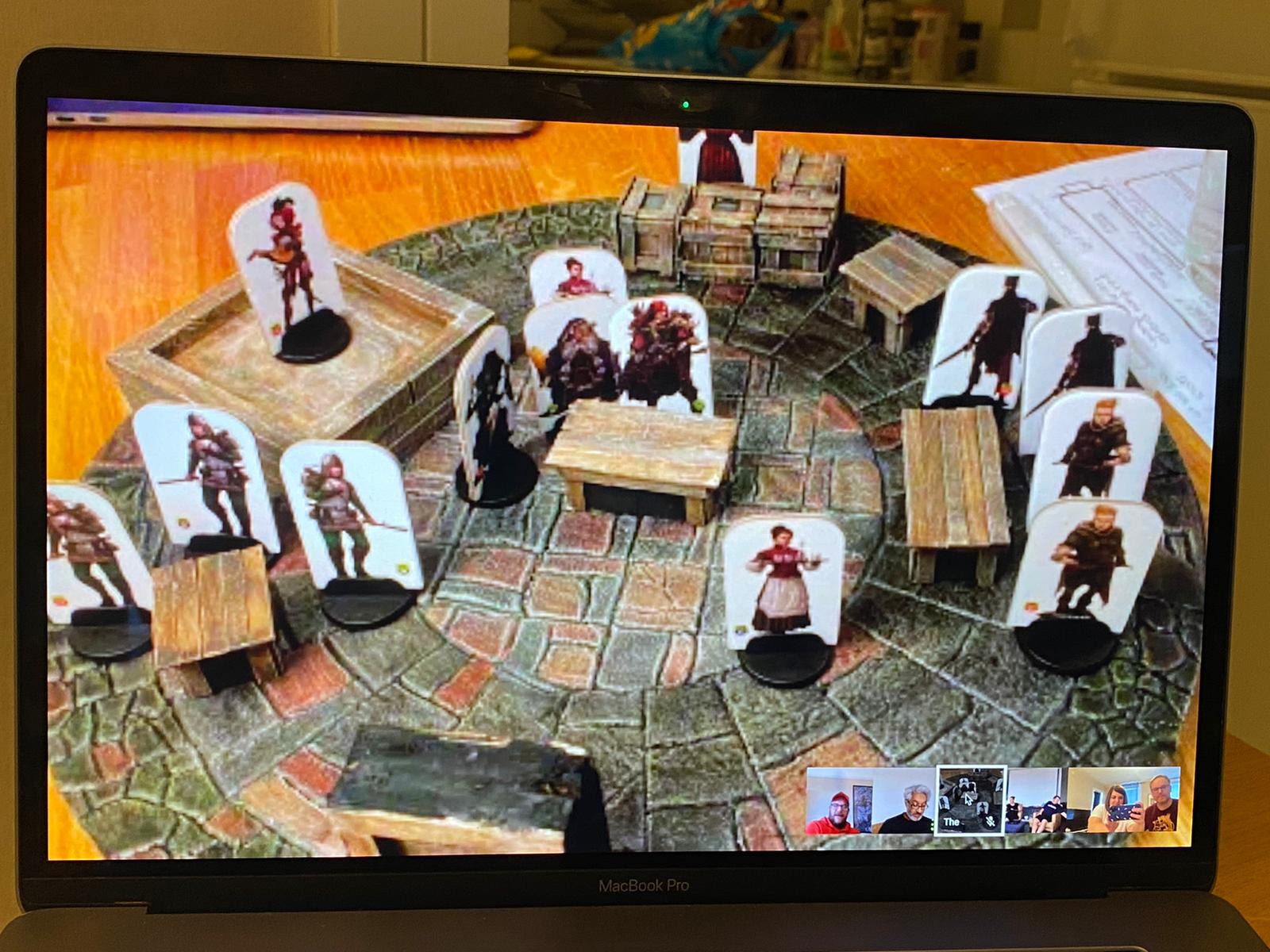 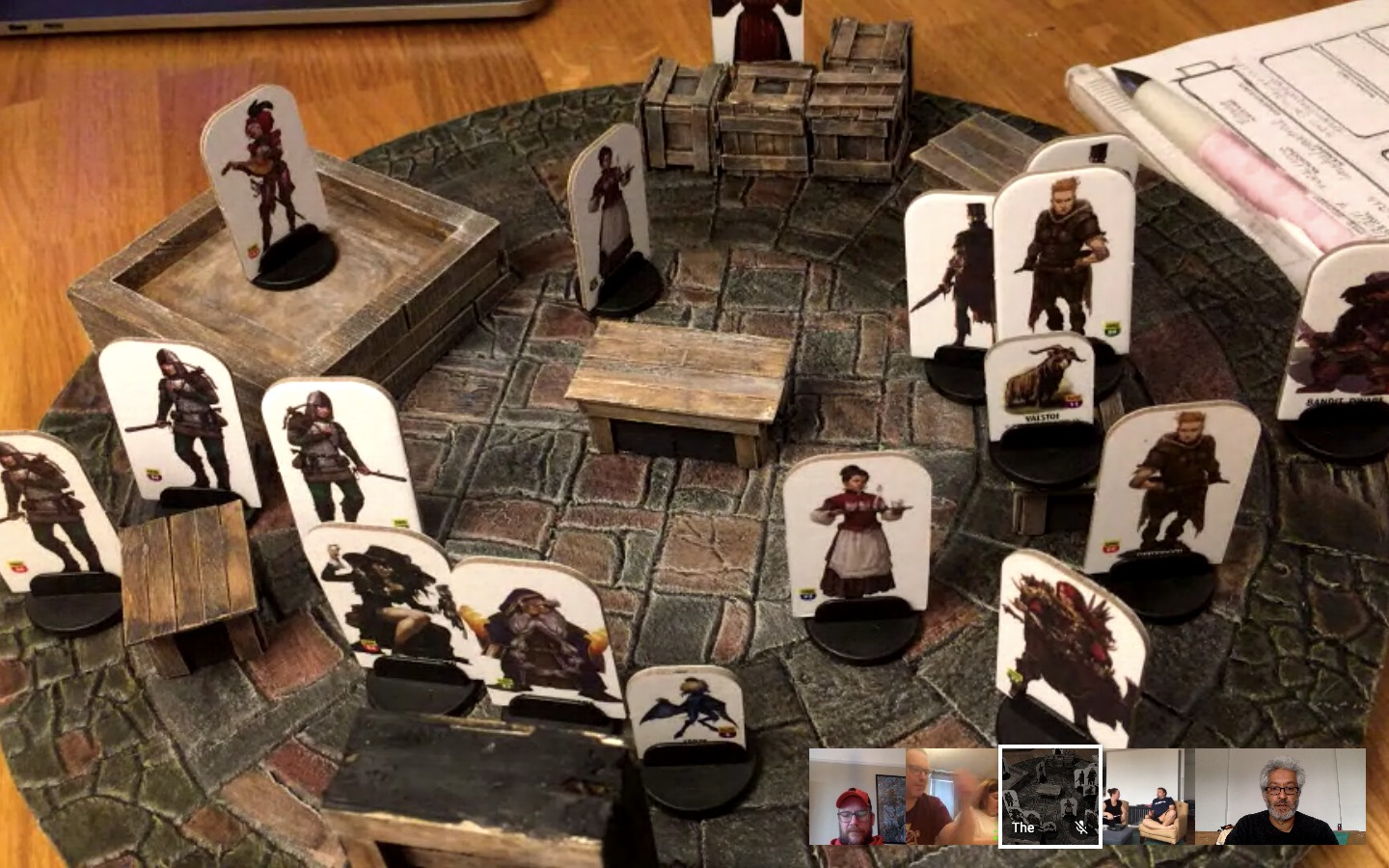 Waltmeg reluctantly, but dutifully took them to the small gambling den, The Flying Snake’s Eyes which double as the hide out for the half-orc gamg leader Lazrgar “The Gov’ness” Stoneeye’s hideout.

After Waltmeg made his exit, having recovered his name, the party made a good enough impression to be brief on the exchange.

The exchange was to happen the following night in Tinker Town.

The party alerted the Springborn Duke to ensure the elves would be close by and be able to come to the aid of the party, should the exchange go sideways.

Then our heroes got some well deserved sleep.

Late in the night the party joined The Gov’ness’ band of mercenaries and headed for Tinker Town and the exchange only to be interrupted by a messenger telling Lazgar of a change in location.

With a sigh she instructed the party to conduct the exchange alone trading a Goblin Baby in a duffle-bag for the Fey Blood at the new location, Warehouse 6 at the docks.

The party headed for the exchange, but was not prepared to risk the baby so they cast Protection from Evil on it and place an immovable stone in the bag so only Grimshaw could life the bag.

At the Warehouse the Heroes had a stand off with a cloaked figure guarded by three Redcaps, but as soon as the Redcaps noticed the duffle bag with the “payment” was locked to the floor, a fight broke out and the cloaked figure revealed herself to be a Bheur Hag with unusual natural fey abilities to control the weather.

But soon the party was emerging as the stronger side and the Hag opened a portal to an icy landscape.

However, the party killed the Hag before she could escape.

The Springborn Duke arrived just in time to see the Hag killed and shouted “The Winter Queen killed your Aunt Tholgina” while pointing at the icy portal.

In a split second decision, Grimshaw and Damon rushed through the portal, Grimshaw to find his Aunt’s killer, Damon to hun his nemesis The Dream Dragon. And they were quickly followed by Alyanys, B.J. and Barien. 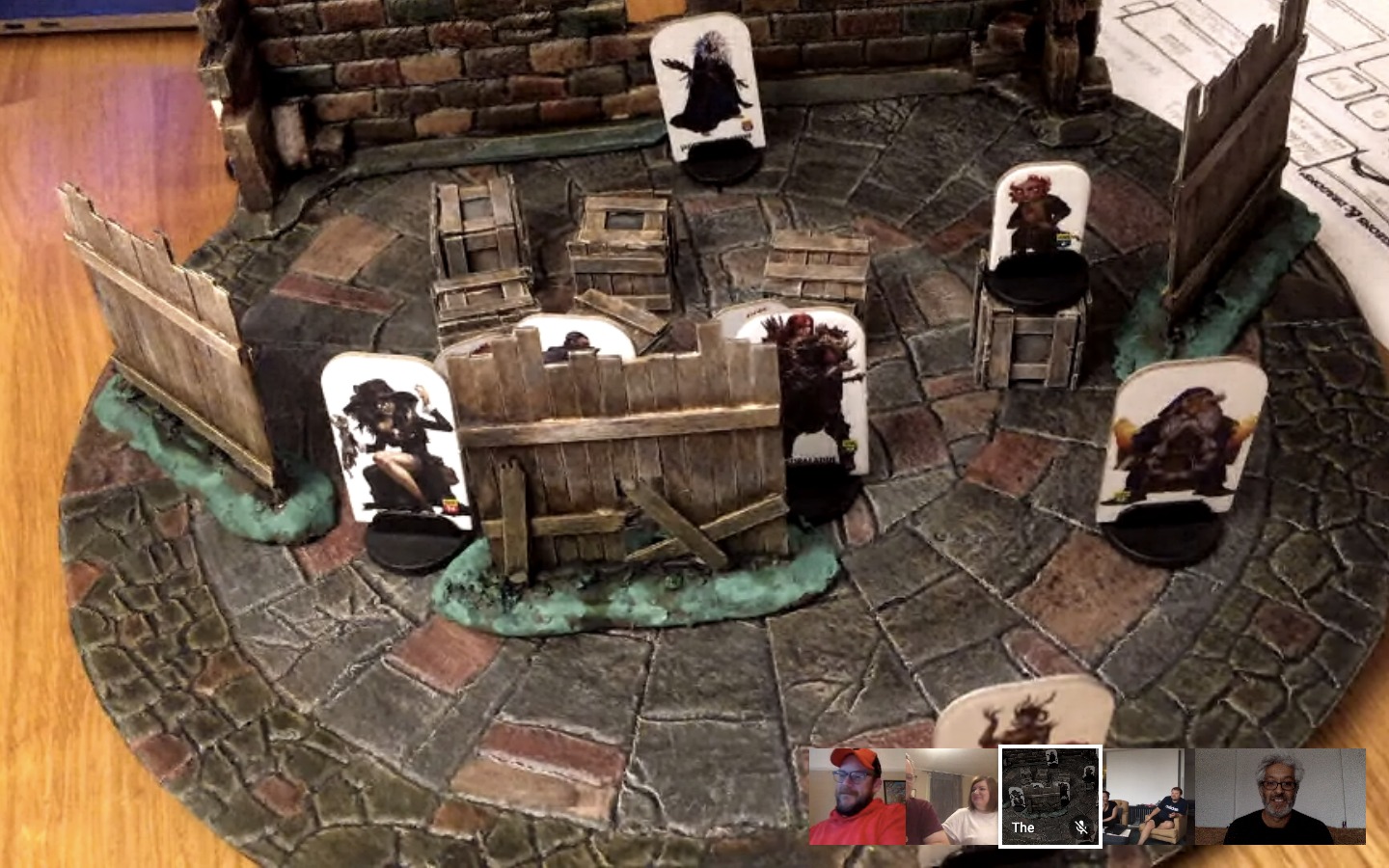 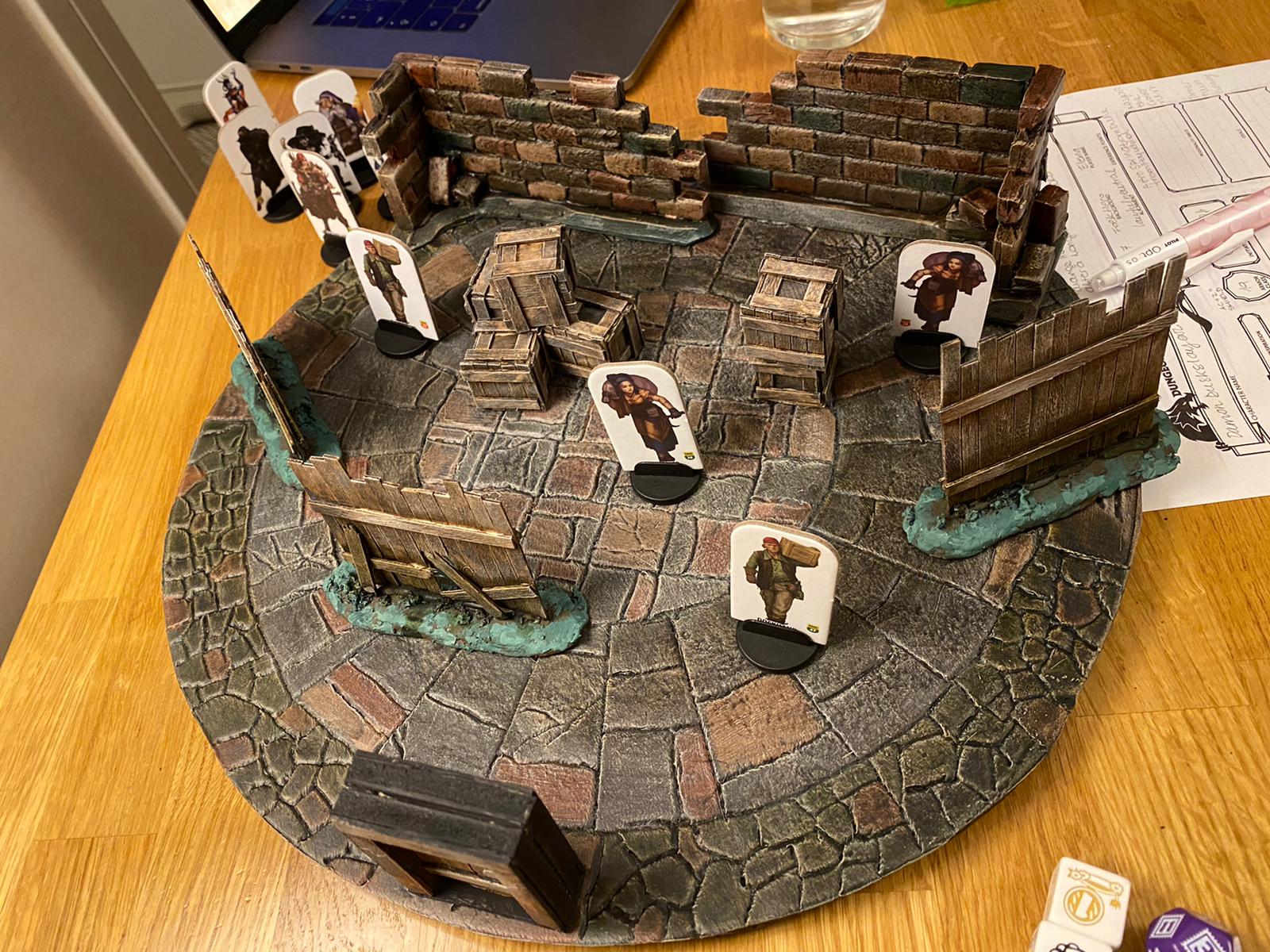 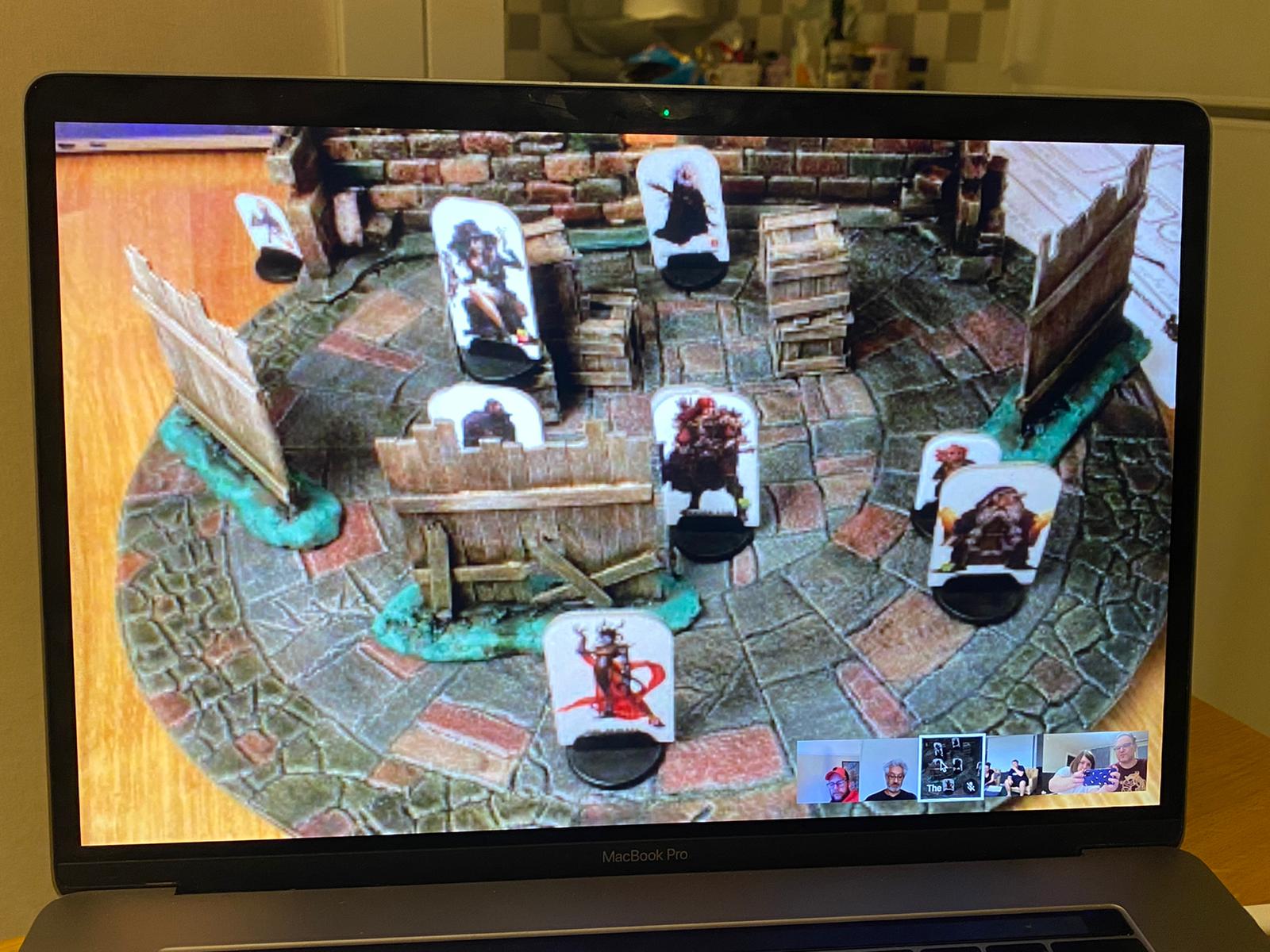 Welcome to the Feywild

The party landed in an snowy and icy forest with blinding white snow reflecting in their eyes.

As their eyes adjusted they looked up at a surprised looking rabbit in clothes saying “Oh, visitors!”