For Chapter 3 we returned to the A team (although one man short) and I planned and ran this game differently from previous games in a number of ways.

Essentially this was one long chase scene, but due to the chase being in the Town of Daisygate, the combinations of player choices made it too complex to plan out every scene as I would normally. normally I draw up a room/encounter and then set up up on the table for a reality check, but I did none of that this time.

Instead I wrote a list of possible obstacles and where they could happen in Daisygate and made each encounter up reacting to what the players did.

I am glad I made it this way. It is my fav game to date, but also because the players did make some choices I had not and could not have foreseen.

The heroes arrive at Daisygate

Following the somewhat adventurous journey to Daisygate, our heroes were glad to arrive at the gate to the lively trading hub, Daisygate.

Following a short intro to the town and its rules by a Daisyguard bureaucrat, the party made their way to “Devil is in the Details”, the law firm managing our Dwarven Barbarian Grimshaw’s inheritance.

The heroes made their way to the home of Grimshaw’s late aunt, a beautiful and neat home, with two floors and a basement.

However, from the dining room the experienced heroes soon found a secret passageway leading to a secret laboratory full of jars of fey creatures in formaldehyde.

. They also noticed fresh foot prints in the dust and by leveraging their animal companions (the rat Mr Giggles and the desert wolf Oro) they identified an invisible intruder, who unfortunately leapt past them and ran into the streets as his invisibility spell wore off.

The intruder ran into the main market, The Scramble in an attempt to shake our heroes, but they tracked with good speed. 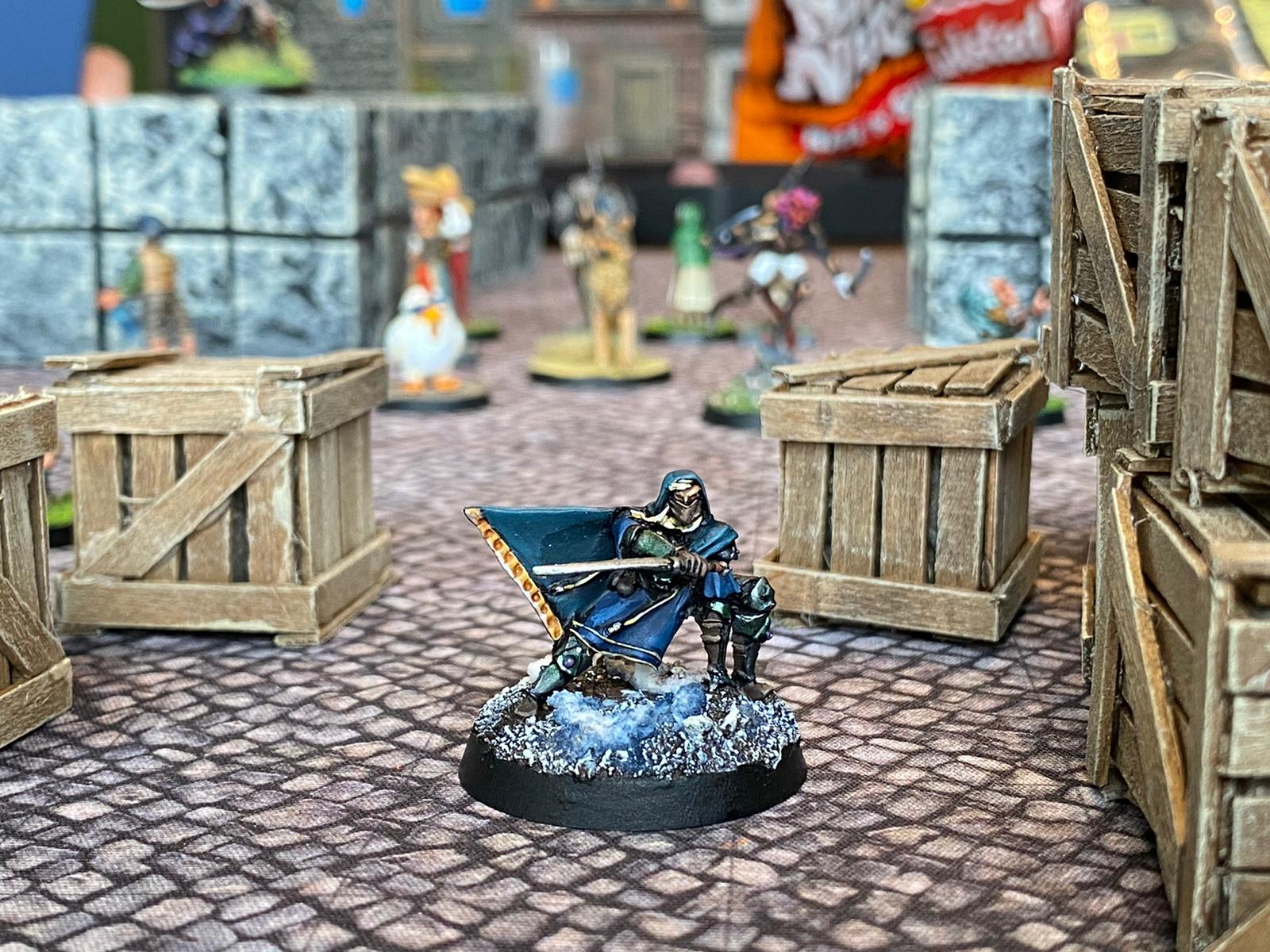 To make the chase more chaotic and unpredictable, I threw a range of obstacles at the party and each time each player had to state what they would do to overcome the obstacle and then all rolled simultaneously.

As the part followed the thief into the scramble, they were blocked by a number of townsfolk visiting the market. Our elf Ranger harpooned himself up on the roof tops in best batman style, while the Tiefling Rouge dodged through the crowd. 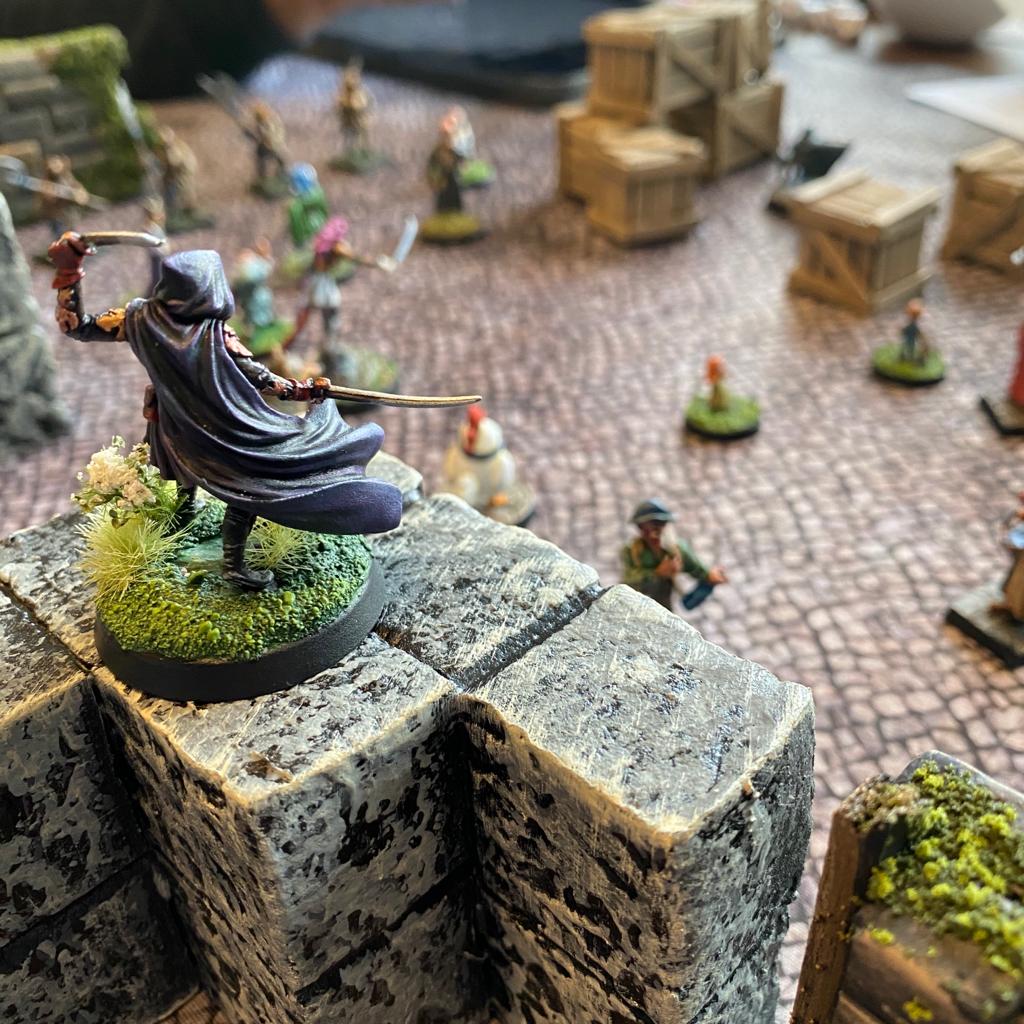 Grimshaw the Dwarf having neither harpoon or the nimbleness to dodge through the crowd, shouted intimidations to make the crowd move… it worked for most part expect for an old woman who in a fit of anger turned the Barbarian into a chicken! Before being promptly arrested by the Daisyguard. 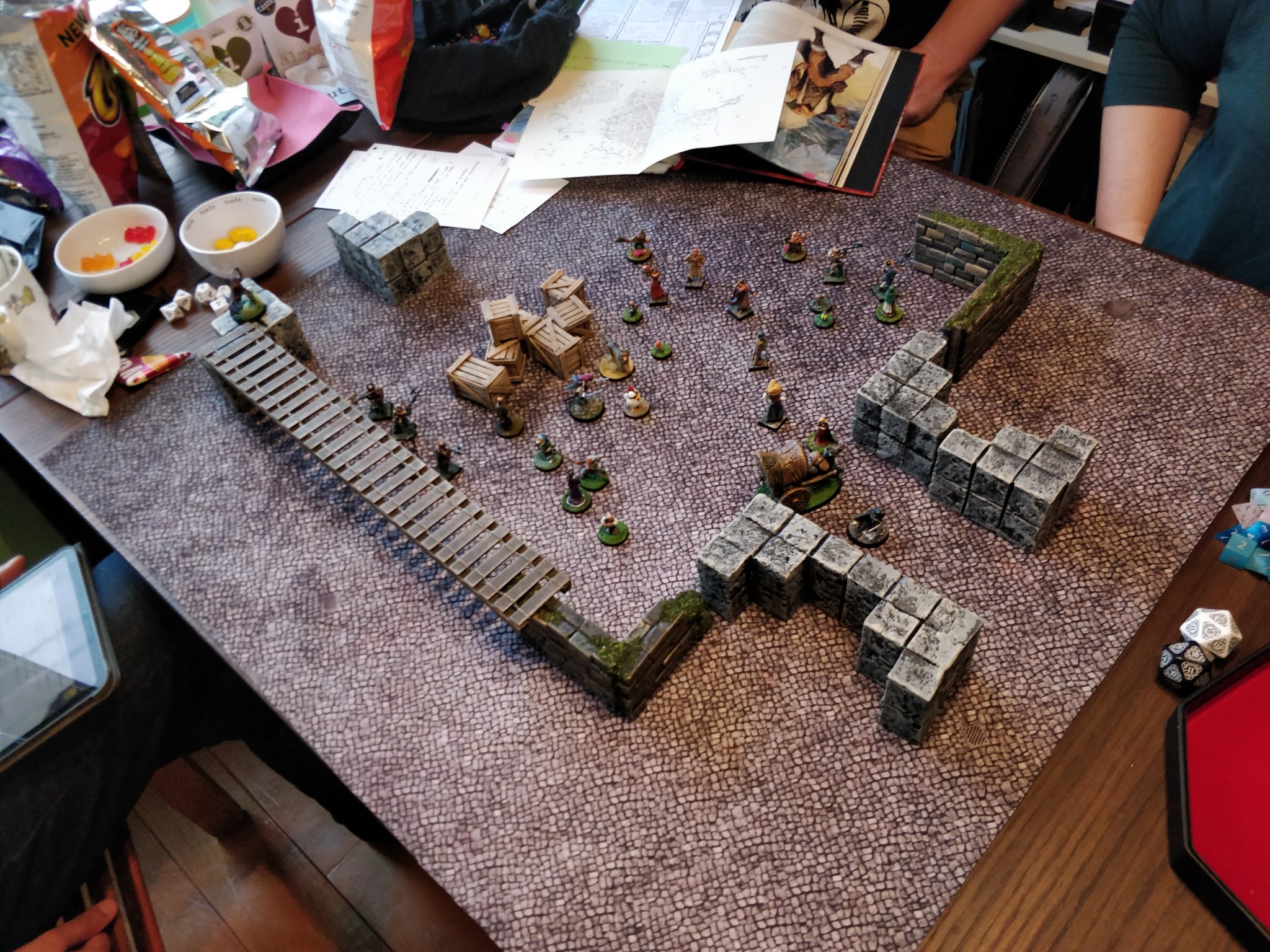 The next obstacle was a bunch of crates that the thief tumbled down on the party. However, with the Ranger on the rooftops, the thief was hit by two arrows as he fled further into the market. this unfortunately drew the attention of the Daisyguard who tried to catch the Ranger.

To cross the crates, the chicken jumped onto the wolf and both jumped over the crates alongside the Rogue. The party was gaining on the thief. 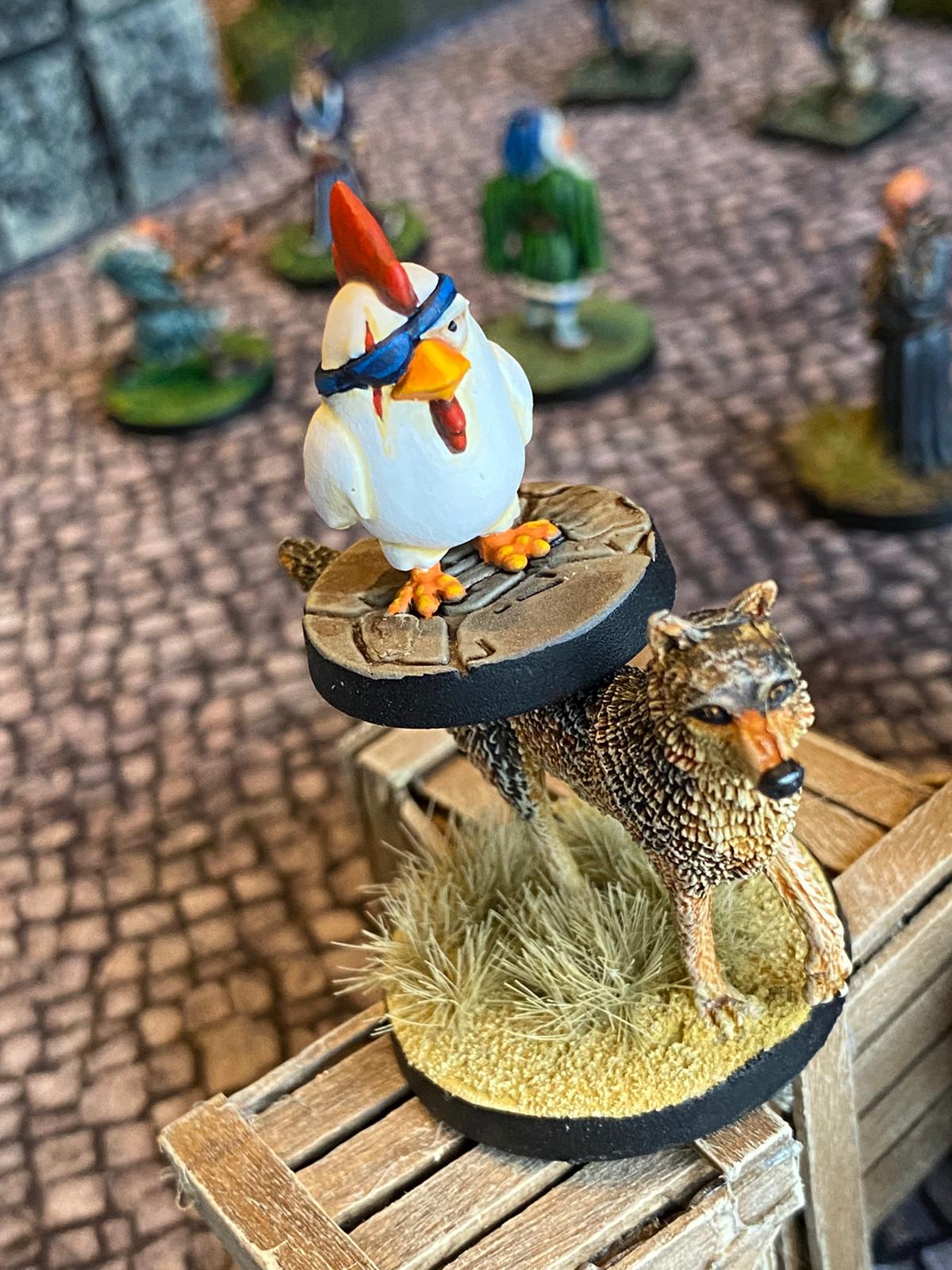 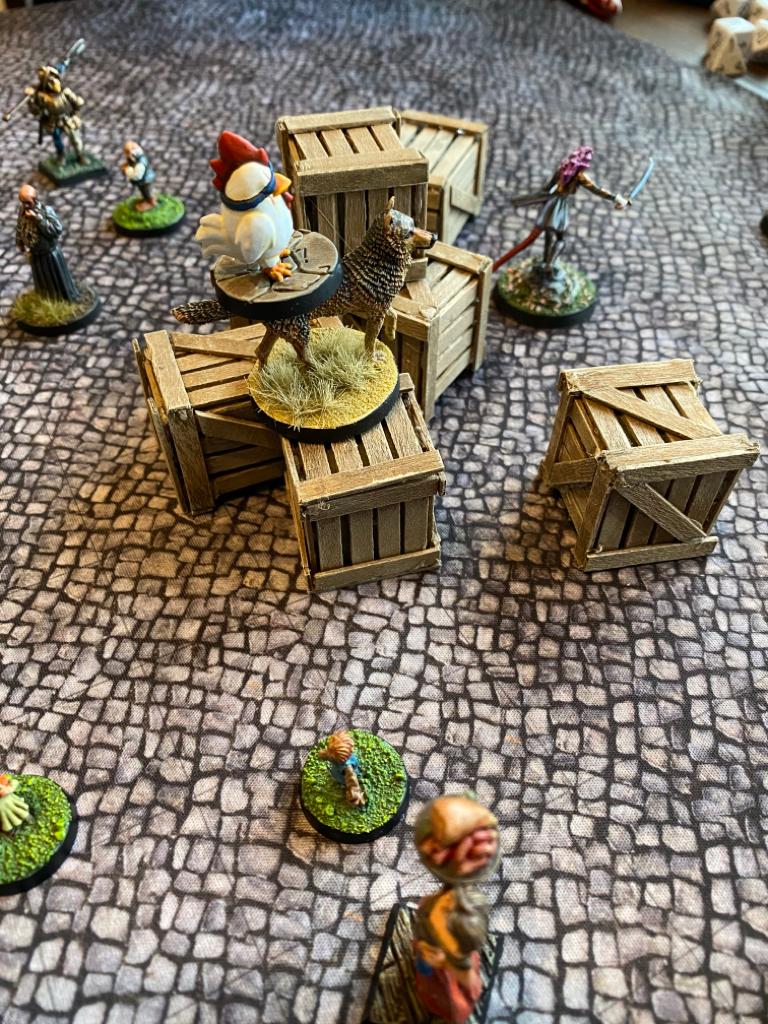 In a fit of desperation, the thief slashed a donkey driving it crazy with fright before leaving the scramble.

The poor animal was kicking and biting blocking the exit, but the animals and the Rogue made it past in such style they even manage to cause some damage to the thief before he fled into The Gutters.

the Gutters are the more seedy quarter of Daisygate, located near the harbour offering whatever dubious entertainment the sailors and the ship builders would spend they hard earned Moon Shillings on.

Here the thief fled into an ally only to face a local gang of thugs lead by an unusually intelligent Ogre. But being a nimble character, he escaped and fled to the roof top only to find the tracking Ranger running alongside him on the opposite roof firing hails of arrows at him.

The Dwarf had reverted out of his chicken state and back to being a badass Barbarian and while the local thugs thought they had the upper hand, they soon found our heroes a handful to deal with, between the raging Dwarf, the invisible Rogue and the growling wolf. 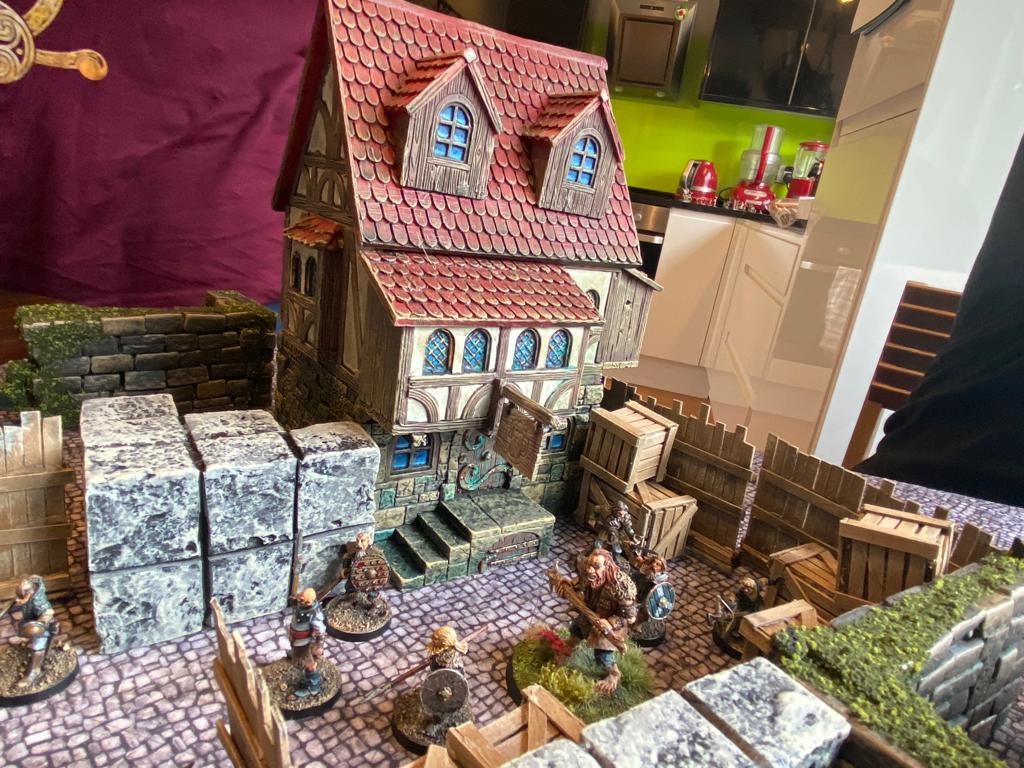 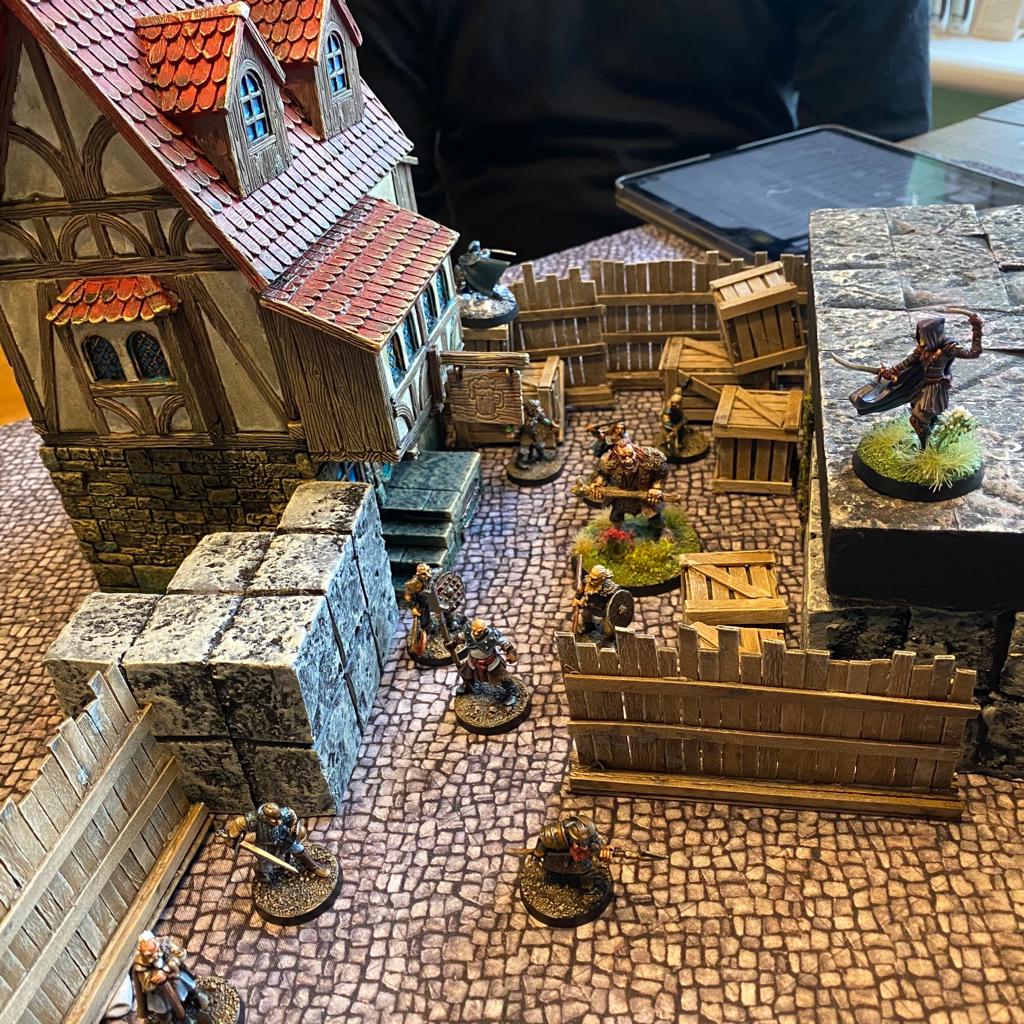 The chase ended with the thief casting mirror image as a last desperate bid to get away, but due to Daisygate’s proximity to the Feywild, the spell misfired and the Ranger mercilessly kept firing arrows that with Hunter’s Mark found their target easily and deadly.

But in a surprise turn of event, the noice from the roof battle drew a curious Wyvern nearby that swooped down and killed the thief before loosing interest and flying off in the horizon.

At the same time the battle on the ground was halted by the Daisyguard showing up in force.

The end of the chase

As the thief liquified due to a tell-no-tales spell, the Ranger jumped across the rooftops to search his corpse.

Puzzled he found nothing but a ledger of coded names with listed fey creatures written next to them.